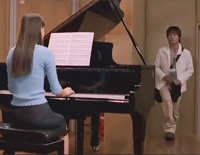 Canon
is one of original soundtracks to South Korean romantic comedy film My Sassy Girl. The film was extremely successful in South Korea and was the highest grossing Korean comedy of all time. When My Sassy Girl was released throughout East Asia, it became a mega blockbuster hit in the entire region, from Japan, China,Taiwan, Hong Kong, as well as Southeast Asia and parts of South Asia, to the point where it was drawing comparisons to Titanic.

And Canon is an adaptation from George Winston’s canon. George Winston is an American pianist who was born in Michigan, and grew up mainly in Miles City, Montana, as well as Mississippi and Florida. He attended Stetson University in DeLand, Florida, and lives in Santa Cruz,California.