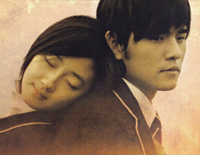 Free Morning Exercise piano sheet music is provided for you. So if you like it, just download it here. Enjoy It!

Morning Exercise
is one of original soundtracks to 2007 Taiwanese film Secret. It is the directorial debut feature film of Taiwanesemusician Jay Chou, who also stars as the male lead and co-wrote the movie.

And Morning Exercise is composed by Jay Chou who is a Taiwanese musician, singer, songwriter, record producer, and actor.