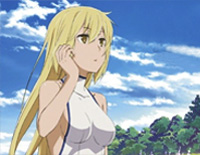 Free RIGHT LIGHT RISE piano sheet music is provided for you. So if you like it, just download it here. Enjoy It!

RIGHT LIGHT RISE is the ending theme to the anime Is It Wrong to Try to Pick Up Girls in a Dungeon?, also known as DanMachi for short, and with English subtitle Familia Myth.

Is It Wrong to Try to Pick Up Girls in a Dungeon? is a Japanese light novel series, written by Fujino Ōmori and illustrated by Suzuhito Yasuda. SB Creative has published seven volumes since January 2013 under their GA Bunko imprint. It has received a spin-off light novel series and three manga adaptations. An anime television series adaptation by J.C.Staffbegan airing from April 3, 2015.

Besides, RIGHT LIGHT RISE is performed by Japanese singer and cellist Kanon Wakeshima. Originally produced by musician and fashion designer Mana, Wakeshima debuted under the DefStar Records label on May 28, 2008.