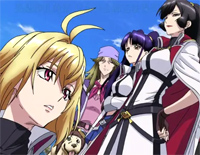 Free Kindan no Resistance piano sheet music is provided for you. So if you like it, just download it here. Enjoy It!

Kindan no Resistance
(禁断のレジスタンス Kindan no Rejisutansu) is the opening theme for TV anime Cross Ange: Rondo of Angels and Dragons. The anime series is produced by Sunrise and began airing on Tokyo MX, MBS, TVA, BS11 from October 2014. The series was licensed by Sentai Filmworks for a digital and home media release in North America. Madman Entertainment also licensed the series for streaming in Australia and New Zealand. The series was picked up by Crunchyroll for streaming in North America and other select parts of the world.

Also Kindan no Resistance is the 30th single by Japanese singer and voice actress Nana Mizuki, released on October 15, 2014 by King Records.