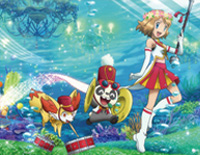 Free DoriDori piano sheet music is provided for you. So if you like it, just download it here. Enjoy It!

DoriDori
(ドリドリ, "Dream Dream") is used as the third ending theme to the anime Pocket Monsters: XY. Pocket Monsters: XY in Japan and internationally as Pokémon: XY, is the eighteenth season of the long running Pokémon animated series. The season premiered in Japan on November 6, 2014 on TV Tokyo. The season later made its premiere in the United States on February 7, 2015 on Cartoon Network.

And DoriDori is performed by Shoko Nakagawa for the next nineteen episodes. Shoko Nakagawa is a Japanese tarento (media personality),actress, voice actress, illustrator, and singer.