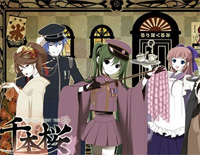 Free Senbonzakura Easy Version piano sheet music is provided for you. So if you like it, just download it here. Enjoy It!

Senbonzakura
, also known as Thousand Cherry Tree or A Thousand Cherry Blossoms, is a song by Japanese VOCALOID Hatsune Miku who was initially released in August 2007 for the VOCALOID2 engine and was the first member of the Character Vocal Series. She was the seventh VOCALOID overall, as well as the second VOCALOID2vocal released to be released for the engine.

And Senbonzakura seems to be about westernization in Japan, which happened during the Meiji Restoration. Despite having an upbeat, oriental track, the song contains rather dark themes, mentioning guillotines and ICBMs. In addition, the lyrics state things such as "Songs of lament go unheard" and "This is a banquet inside a steel jail cell".