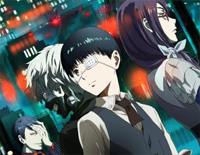 Unravel
is a theme song from the anime television series Tokyo Ghoul. The anime was adapted by Pierrot aired on Tokyo MX between July 4 and September 19, 2014. It also aired on TVA, TVQ, TVO,AT-X and Dlife.

And unravel is performed by TK from Ling Tosite Sigure. Ling Tosite Sigure is an indie rock and math rock trio formed in 2002 in Saitama, Japan. The band's style resembles post-hardcore and progressive rock, often incorporating rapid changes of tempo and mood couched in complex guitar melodies and technical drumming.