All the Way North-Initial D OST 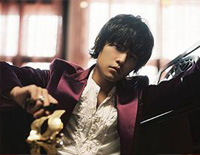 Free All the Way North piano sheet music is provided for you. So if you like it, just download it here. Enjoy It!

All the Way North
is used as an insert song to 2005 Hong Kong action film Initial D. It is a film adaptation of the Japanese Initial D manga and anime series. The movie's main character, Takumi Fujiwara, is portrayed by Jay Chou.

And All the Way North is from Taiwanese Mandopop artist Jay Chou's sixth Mandarin studio album November's Chopin which was released on 1 November 2005 by Alfa Music and distributed by Sony Music Taiwan. The album was released with a bonus DVD containing three music videos.