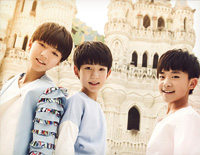 Free Magic Castle piano sheet music is provided for you. So if you like it, just download it here. Enjoy It!

Magic Castle
is a song by TFBOYS, a Chinese music band formed by TF Entertainment. The group consists of Wang Junkai, who is the leader and a main vocalist, Wang Yuan, the lead vocal, and Yi YangQianXi, the lead dancer.

And Magic Castle was released on March 13, 2014. Also it is the promotion song for the 2014 Chinese animated fantasy adventure film Roco Kingdom 3 directed by Gong Bingsi.