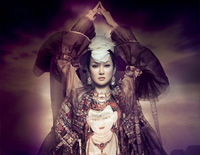 Free Alive piano sheet music is provided for you. So if you like it, just download it here. Enjoy It!

Alive is a song by Sa Dingding who is a Chinese folk singer and songwriter. She is of mixed Han and Mongol ancestry, and sings in languages. She also plays traditional instruments such as the guzheng and matouqin (horse-head fiddle).

And the song was included in her second album Alive released in 2007. On this album, Sa Dingding sings in Mandarin, Sanskrit, Tibetan, the nearly extinct Laghu language and an imaginary self-created language to evoke the emotions in her songs.