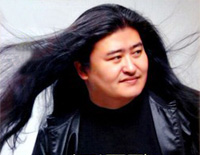 Free Heroes' Song piano sheet music is provided for you. So if you like it, just download it here. Enjoy It!

Heroes' Song is one of the theme songs for the 1998 series The Water Margin. The television series was adapted from Shi Nai'an's classical novel of the same title. It was produced by CCTV with Zhang Jizhong as producer. It was first broadcast in China in January 1998. The series also featured action choreography by Yuen Woo-ping.

And Heroes' Song is performed by Liu Huan who is a Chinese singer and songwriter. He is one of China's modern era pioneers in pop music and is considered China's King of Pop. He combines his music career with teaching the history of Western music at the Beijing University of International Business and Economics in Beijing.