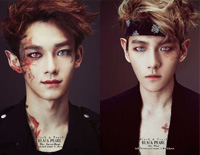 Free Black Pearl piano sheet music is provided for you. So if you like it, just download it here. Enjoy It!

And Black Pearl is included in their first studio album XOXO released on June 3, 2013. The album is a follow-up to the group's debut EP, Mama (2012). Like all of the group's music, the album was released in two versions – a Korean "Kiss" edition and a Chinese "Hug" edition.