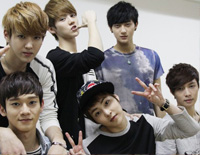 Free Two Moons piano sheet music is provided for you. So if you like it, just download it here. Enjoy It!

Two Moons is a song from South Korean-Chinese boy band EXO’s debut studio EP Mama produced and released by S.M. Entertainmenton April 9, 2012 in two language editions – Exo-K's Korean version and Exo-M's Mandarin version. The title for the EP is a Korean term used to address to a royal person, similar to the attributes "your highness" or "your majesty" in English. The EP was produced by Lee Soo-man, who is also the main producer for the group. The track "Two Moons" is featured in Teaser #12, which starred Exo-K's Kai and Exo-M's Lay.