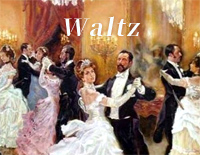 This Waltz is composed by Frédéric François Chopin (pron.: /ˈʃoʊpæn/; French pronunciation: ​[fʁe.de.ʁik ʃɔ.pɛ̃]; 1 March or 22 February 1810 - 17 October 1849), born (and known in Poland as) Fryderyk Franciszek Chopin, who was a Polish composer and virtuoso pianist. He is widely considered one of the greatest Romantic piano composers. Chopin was born in Żelazowa Wola, a village in the Duchy of Warsaw. A renowned child prodigy, he grew up in Warsaw and completed his music education there; he composed many of his mature works in Warsaw before leaving Poland in 1830 at age 20, shortly before the November 1830 Uprising.


"Waltz" is well known by people and if you like it, you can also download the free Waltz sheet music to play with Everyone Piano. Just Enjoy It!