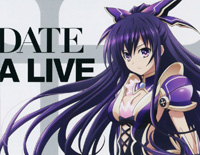 Free Trust in You piano sheet music is provided for you. So if you like it, just download it here. Enjoy It!

Trust in You is used as the opening theme to the anime series Date A Live II. The anime adaptation is directed by Keitaro Motonaga and produced by AIC PLUS+. The series was streamed in lower quality on Niconico, with each episode available a week before its TV premiere. The first episode was streamed on March 31 and aired on Tokyo MX on April 6, 2013. The final, 12th episode was streamed on Niconico on June 16 and aired on Tokyo MX on June 22. Following the TV broadcast of the final episode of the first season, a second season is set for April 2014.

And Trust in You is sung by Sweet Arms, a vocal group consisting Iori Nomizu, Misuzu Togashi, Kaori Sadohara, and Misato.