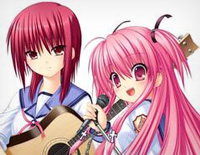 Free Hikari ni Yosete piano sheet music is provided for you. So if you like it, just download it here. Enjoy It!

Hikari ni Yosete is used as one of the original soundtracks to the game Little Busters!. And it was composed by Shinji Orito who is a Japanese musical composer.

Little Busters! is Key's sixth game, along with other titles such as Kanon, Air, and Clannad. An adult version of the game titled Little Busters! Ecstasy was released on July 25, 2008 for Windows, unlike Kanon and Air, which were first released with adult content and then had later versions with such content removed. Ecstasy was later ported to the PlayStation 2, PlayStation Portable, PlayStation Vita, and PlayStation 3. The story follows the life of Riki Naoe, a high school student who has been a member of a group of friends named the Little Busters since childhood. Riki brings multiple girls at his school into the Little Busters to have enough people to play a baseball game.