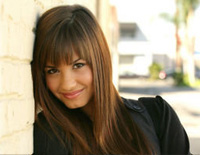 Free Believe in Me piano sheet music is provided for you. So if you like it, just download it here. Enjoy It!

Believe in Me
is from the album Don't Forget which is performed by American singer Demi Lovato. Don't Forget was met with generally positive reviews from critics. Stephen Thomas Erlewine of AllMusic wrote a positive review of album, calling it "pure pop for tween people". He said that the "parade of urgent, insistent guitar pop" is what makes the album memorable, stating, "the kind of pop that feels disposable but winds up sticking around longer than its more considered cousins. This kind of trashy fun was missing on A Little Bit Longer, so it's nice to find that it surfaces proudly on Don't Forget."

The Lyrics of Believe in Me:


[Chorus:]
I don't wanna be afraid
I wanna wake up feeling beautiful..today
And know that I'm okay
Cause everyone's perfect in unusual ways
So you see, I just wanna believe in me

[Verse 2]
The mirror can lie
Doesn't show you what's inside
And it, it can tell you you're full of life
It's amazing what you can hide
Just by putting on a smile

[Chorus:]
Not gonna be afraid
I'm going to wake up feeling beautiful..today
And know that I'm okay
Cause everyone's perfect in unusual ways
So you see, now, now I believe in me
Now I believe in me