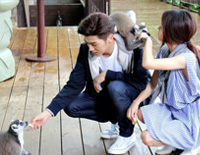 Back in Time-Bromance OST Introduction

Free Back in Time piano sheet music is provided for you. So if you like it, just download it here. Enjoy It!

Back in Time
is a song by Bii who is a Chinese-language singer from South Korea, active in Taiwan. Bii was always interested in music. He was the lead singer in his high school band. Later he went to Dongguan, China to find his father (where he worked) and to pursue a musical career. The name "Bii" stands for "Be I, I", indicating his dual personas.

And Back in Time is used as an original soundtrack to 2015-2016 Taiwanese romantic comedy television series Bromance starring Baron Chen, Megan Lai, Bii, Sean Lee and Yuan Chen. Filming began on September 19, 2015 and the first original broadcast began on October 18, 2015.