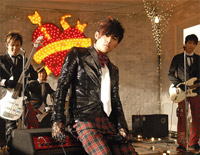 Free Sunshine Homeboy piano sheet music is provided for you. So if you like it, just download it here. Enjoy It!

Sunshine Homeboy
is a song performed by Taiwanese Mandopop artist Jay Chou. Chou's compositions are loosely categorized as pop music. While many of his works fall into contemporary R&B, rap, and rock genres, the term "Chou Style" has been popularized to describe his trademark cross-cultural music and his insistence on singing with slurred enunciation.

And Sunshine Homeboy is from his eighth Mandarin studio album On the Run. This is the first album that Chou released under his own record company, JVR Music and distributed by Sony Music Taiwan.