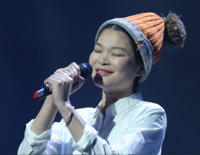 Free The Wild Child piano sheet music is provided for you. So if you like it, just download it here. Enjoy It!

The Wild Child
is a song performed by Su Yunying who is a Chinese singer-songwriter. Su Yunying, also known as Sue Su, was born and raised in Sanya, Hainan. She rose to prominence in 2015 on Sing My Song, just performing her own written debut song called "Yezi" (translated as "The Wild Child") and won second place. Su also participated in the 2016 season of the Hunan Television show I Am a Singer.