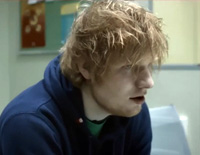 Free Small Bump piano sheet music is provided for you. So if you like it, just download it here. Enjoy It!

On 26 March 2012, Sheeran announced on Twitter that Small Bump would be released as the fifth single from his debut album and saying “Before it gets out there, I’d like to be the first one to announce what the fifth single taken from my album.” He added: “So the single is Small Bump. The song is written in the key of B-flat major. The song is about Sheeran’s close friend and laments her late miscarriage at five months into the pregnancy. It is sung from a first-person perspective. A remix by Asa & Stumbleine was due to feature on the EP but was never finished.

The Lyrics of Small Bump :

You're just a small bump unknown, you'll grow into your skin
With a smile like hers and a dimple beneath your chin
Finger nails the size of a half grain of rice
And eyelids closed to be soon opened wide
A small bump, in four months you'll open your eyes