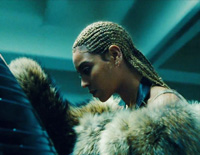 Free Sandcastles piano sheet music is provided for you. So if you like it, just download it here. Enjoy It!

Sandcastles is a 2016 Beyoncé song from Lemonade. Lemonade is the sixth studio album by American singer Beyoncé, released on April 23, 2016, by Parkwood Entertainment and distributed through Columbia Records. The record is Beyoncé's second "visual album", following her eponymous 2013 record, and a concept album.

Beyoncé Giselle Knowles-Carter is an American singer, songwriter, record producer and actress. Throughout a career spanning 19 years, she has sold over 100 million records as a solo artist, and a further 60 million with Destiny's Child, making her one of the best-selling music artists of all time. She has won 20 Grammy Awards and is the most nominated woman in the award's history. She is the most awarded artist at the MTV Video Music Awards, with 24 wins.

The Lyrics of Sandcastles: