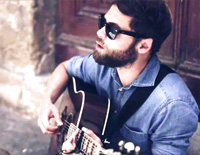 Free Beautiful Birds piano sheet music is provided for you. So if you like it, just download it here. Enjoy It!

Beautiful Birds is a song by Passenger. It is recorded in the seventh studio album Young as the Morning, Old as the Sea, released on 23 September 2016 on Black Crow Records. A deluxe edition was released containing six additional acoustic versions of songs appearing on the album. The album was produced by Chris Vallejo and Mike Rosenberg.

The collaboration with Birdy is nice enough, as are the old fashioned trad-folk sounds of Everything – and that’s the thing: it’s all nice. All this from the man who used to run rings around your brain." Lauren Murphy of the The Irish Times wrote, "His “If it ain’t broke, don’t fix it” approach means that songs such as Everything and Fool’s Gold lumber pleasantly but forgettably along, while the addition of Birdy on vapid duet Beautiful Birds makes scant difference.

The Lyrics of Beautiful Birds:

You remember when we were two beautiful birds, we would light up the sky, when we’d fly,
You were orange and red, like the sun when it sets, I was green as an apple’s eye.

You said you loved all the songs that I'd sing, but nothing like you’d ever heard,
And I said I loved you with all of my heart when we were two beautiful birds.

Remember when we were two beautiful birds, we would say when the morning would come,
You are silver and blue like the moon when it’s new, I was gold as the summer sun.

But one day you asked for a different song,
One that I just couldn’t sing,
I got the melody sharp, and the words all wrong,
Those were the last days of spring.

To build a nest we pecked feathers from our chests,
Like a book tearing out every page,
We weren’t to know that these feathers would grow,
Into a beautiful cage.