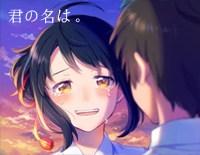 Free Nandemo Nai Ya piano sheet music is provided for you. So if you like it, just download it here. Enjoy It!

Nandemo Nai Ya is the ending theme of Your Name, a 2016 Japanese anime fantasy film written and directed by Makoto Shinkai, animated by CoMix Wave Films, and distributed by Toho.

Nandemo Nai Ya is performed by Japanese rock band Radwimps.

Please Tell Me Your Name:

In the film Your Name, the main actor and actress changed their body by accident.  When back into reality, they tried to find whose body they are in. At last they asked the name to each other with the music. It seems like it is the song what brought them to each other.