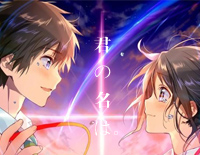 Free Kataware Doki piano sheet music is provided for you. So if you like it, just download it here. Enjoy It!

Kataware Doki is the original sound track of Your Name, a 2016 Japanese anime fantasy film written and directed by Makoto Shinkai, animated by CoMix Wave Films, and distributed by Toho.

Besides, we offer Your Name Chinese theme song Song About You , Ending theme Nandemo Nai Ya, Mitsuha's Theme Nandemonaiya and Opening theme ZenZenZense, and another OST  Deito , Yumetōrō  to you!