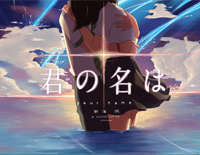 Free Goshintai e Futatabi piano sheet music is provided for you. So if you like it, just download it here. Enjoy It!

Goshintai e Futatabi
is the original sound track of Your Name, a 2016 Japanese anime fantasy film written and directed by Makoto Shinkai, animated by CoMix Wave Films, and distributed by Toho.