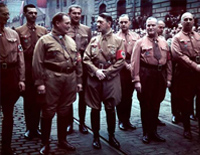 Free Badenweiler Marsch piano sheet music is provided for you. So if you like it, just download it here. Enjoy It!

Badenweiler Marsch is a famous Bavarian military march by composer Georg Fürst (1870–1936). After 1934, with its name Germanized to Badenweiler Marsch by the Nazis, it was used as the official march of Hitler in his role as Führer, to signal his arrival and therefore personal presence at public events.

Badenweiler Marsch is often reported as Adolf Hitler's favourite. However, Hitler is quoted in Traudl Junge's autobiography, Until the Final Hour, as denying that it was his favourite march, and was merely misconstrued as such because of a favourable remark he had made about it.