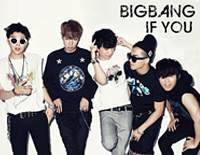 Free If You piano sheet music is provided for you. So if you like it, just download it here. Enjoy It!

If You
is a single recorded by South Korean group Big Bang. It was released digitally on July 1, 2015 by YG Entertainment, as the fifth single from MADE Series, and the first from D.

If You sold 308,120 digital copies in the first week on Gaon Chart, making it the fourth-best first week sales in 2015, and peaked at number one in Digital Chart. The song charted at number two on the BGM Chart, four on the Streaming Chart with total 4.871 million streams and number 22 on the Mobile Chart. On the second week, the song fell to number four in Digital Chart and no.7 in Download chart with total 130,714 sales, but raised to number two in the Streaming Chart with total 5.459 streams. The song topped Gaon monthly digital chart for month July with total 627,808 sales and 21.247 million streams.