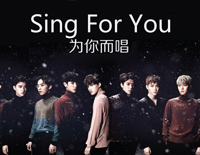 Free Sing for You piano sheet music is provided for you. So if you like it, just download it here. Enjoy It!

Sing for You
is from South Korean-Chinese boyband EXO's fourth extended play Sing for You. It was released by S.M. Entertainment in Korean and Chinese versions on December 10, 2015. The album held the record as the fastest selling album in the history of South Korean album sales chart Hanteo, until it was overtaken by Exo's third studio album Ex'Act in June 2016.

Both versions combined, Sing for You broke the record previously held by Exodus, Exo's second studio album, as the album with the biggest first-week sales recorded by the Korean album sales monitoring website Hanteo with over 267,900 copies. Individually, the album's Korean and Chinese versions debuted at number 1 and 2 respectively on both Gaon's weekly and monthly album charts, and later landed at number 2 and 7 respectively on its yearly album chart for 2015.