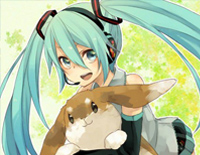 Free Usotsuki no Parade piano sheet music is provided for you. So if you like it, just download it here. Enjoy It!

Usotsuki no Parade
, also known as Parade of Liars, is a song performed by Hatsune Miku, a bilingual VOCALOID developed by Crypton Future Media.

And Usotsuki no Parade is included in supercell which is the redistribution of ryo's first album by Sony Music Direct. It contains 12 tracks, all sung by Hatsune Miku. The album sold over 20,000 copies and ranked number 4 in the Oricon Weekly Charts its first week of sale. In 2009, the album was awarded a Gold Disc by the Recording Industry Association in Japan for having exceeded 100,000 copies shipped in a single year. The album is sold as a regular and limited edition album. Both comes with one CD and one DVD (containing four music videos), but only the limited edition comes with a special illustration booklet titled supercell.