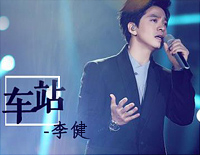 Station-I Am a Singer Introduction

Free Station piano sheet music is provided for you. So if you like it, just download it here. Enjoy It!

Station
is a song performed by Chinese singer Li Jian on the stage of TV series I Am a Singer. To date, he has produced eight albums. He is most well known for his song "Chuan Qi" (Legend) which became a huge hit after Chinese diva Faye Wong performed it on the 2011 Spring Gala.

While its original name is 駅 (Eki/Station) which was sung by Akina Nakamori who is a Japanese pop singer and actress. She was one of the most popular singers of the 1980s in Japan. She is known for her deep, power-house voice. And the song was included in her album CRIMSON.