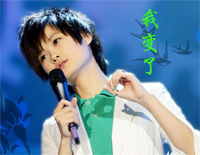 I Have Changed-Li Yuchun Introduction

Free I Have Changed piano sheet music is provided for you. So if you like it, just download it here. Enjoy It!

I Have Changed
is a song by Chinese singer Li Yuchun. For the song, Li Yuchun made a cooperation with singer and songwriter Tao Jingying,composer Lv Wenfei and Wang Peng.

Li Yuchun，also known as Chris Lee, is a Chinese singer, songwriter, actress, director, fashion icon and philanthropist, who became one of the country’s top pop stars after winning a nationally televised talent contest in 2005. She subsequently released 52 top singles. Li recorded and released her first studio album, Huang Hou Yu Meng Xiang (The Queen and the Dreams), in September 2006. Her 2006 first album The Queen and Dreams reached sales of 1.37 million. Since her debut, she has released 8 top-selling albums and 4 films. To date, she has had 56 hit singles on Chinese Music Billboard.