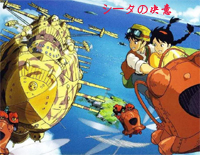 Free Sheeta's Decision piano sheet music is provided for you. So if you like it, just download it here. Enjoy It!

Sheeta's Decision is a piece of music created by Joe Hisaishi for Japanese animated adventure film Castle in the Sky.

Mamoru Fujisawa, known professionally as Joe Hisaishi is a Japanese composer and musical director known for over 100 film scores and solo albums dating back to 1981.

Castle in the Sky is a 1986 Japanese animated adventure film written and directed by Hayao Miyazaki, and is also the first film produced and released by Studio Ghibli. The film was distributed by Toei Kabushiki Kaisha. Laputa: Castle in the Sky won the Animage Anime Grand Prix in 1986.


Besides, we offer Castle in the Sky-Wild Version to you!
[ + More Information ]