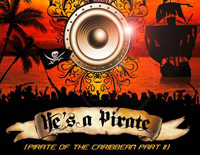 Free He's a Pirate piano sheet music is provided for you. So if you like it, just download it here. Enjoy It!

He's a Pirate
is a 2003 track composed by Klaus Badelt and Hans Zimmer for the 2003 Disney film Pirates of the Caribbean: The Curse of the Black Pearl. It is featured on the soundtrack album of the film and is used at the beginning of the credits for the film.

Klaus Badelt is a German film composer, known for his collaborations with Hans Zimmer, helping to write scores for dozens of critically acclaimed films including The Thin Red Line, The Prince of Egypt, Gladiator, and Pirates of the Caribbean: The Curse of the Black Pearl. Hans Florian Zimmer is a German film score composer and record producer. Since the 1980s, he has composed music for over 150 films. His works include The Lion King.