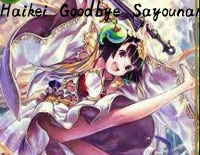 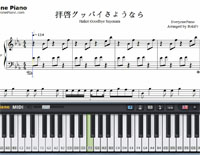 }
Free Haikei Goodbye Sayonara piano sheet music is provided for you. So if you like it, just download it here. Enjoy It!

Haikei Goodbye Sayonara is performed by Japanese singer DAOKO as the ending theme song of anime Shingeki no Bahamut: Virgin Soul.  Daoko is a female singer and rapper born in Tokyo. She started her career when one of her uploaded videos on Nico Nico Douga received attention at the age of 15 in 2012.

Rage of Bahamut: Genesis is a Japanese anime television series produced by MAPPA that is based on the Rage of Bahamut game. The anime aired between October 6, 2014 and December 29, 2014 for 12 episodes. Shingeki no Bahamut: Virgin Soul is a second season, and is scheduled to premiere on April 7, 2017.