Behind the light-Midnight Diner OP 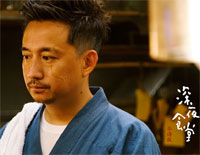 Behind the light-Midnight Diner OP Introduction

}
Free Behind the light piano sheet music is provided for you. So if you like it, just download it here. Enjoy It!

Behind the light is a song by Taiwanese singer Jam Hsiao, as the opening theme of television series Midnight Diner.

Jam Hsiao is a Taiwanese singer and actor. In May 2007, Hsiao took part in the first season of China Television (CTV)'s star search show, One Million Star. He was a challenger on that show and instantly rose to fame with his wide vocal ranges and unique singing style. His diverse music genres and charisma quickly captured the attention of the Taiwanese media and music industry. He signed a contract with Warner Music Taiwan in 2008 and released his debut album, Jam Hsiao, in the same year.

Midnight Diner is a Chinese television series adapted from the Japanese manga series Shinya Shokudō. The series is directed by Tsai Yueh-Hsun and stars Huang Lei as the protagonist. The series started airing on June 12, 2017 via Beijing TV and Zhejiang TV.