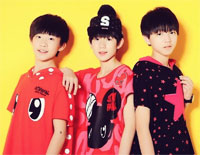 }
Free Chayo AMIGO piano sheet music is provided for you. So if you like it, just download it here. Enjoy It!

TFBOYS is a teenage Chinese boy band formed by Time Fengjun Entertainment (TFent). The group consists of the leader, Wang Junkai, and members Wang Yuan and Yiyang Qianxi. They officially debuted on August 6, 2013 and gained popularity rapidly on the internet, through social media platforms and video sharing platforms.