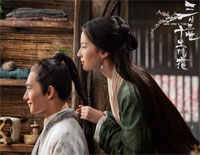 }
Free Blooms Over Blooms piano sheet music is provided for you. So if you like it, just download it here. Enjoy It!

Blooms Over Blooms is a song by Chinese singer-songwriter Jane Zhang.

Jane Zhang She debuted her singing career by winning the third place at the Chinese singing contest Super Girl in 2005. The next year she released her debut album The One. Known for her signature whistle register, she dubbed the Dolphin Princess. In July 2014, Zhang announced she has signed with Sony Music, and released her sixth studio album The Seventh Sense. In January 2015, she took part in the season three of the Chinese television program I Am a Singer. In October 2016, she released the single Dust My Shoulders Off.