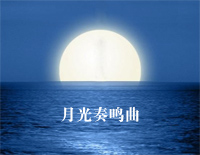 The Piano Sonata No. 14 in C-sharp minor "Quasi una fantasia", Op. 27, No. 2, popularly known as the Moonlight Sonata, is a piano sonata by Ludwig van Beethoven. Completed in 1801 and dedicated in 1802 to his pupil, Countess Giulietta Guicciardi, it is one of Beethoven's most popular compositions for the piano.

The name Moonlight Sonata has its origins in remarks by the German music critic and poet Ludwig Rellstab. In 1832, five years after Beethoven's death, Rellstab likened the effect of the first movement to that of moonlight shining upon Lake Lucerne. Within ten years, the name ("Mondscheinsonate" in German) was being used in German and English publications. Later in the nineteenth century, it could be said that the sonata was "universally known" by that name

And Moonlight Sonata consists of three movements:
1. Adagio sostenuto, in C♯ minor, is written in an approximate truncated sonata form.
2. Allegretto is a relatively conventional scherzo and trio, a moment of relative calm written in D-flat major, the more easily-notated enharmonic equivalent of C♯ major, the parallel major of C♯ minor.
3. Presto agitato, n sonata form, is the weightiest of the three, reflecting an experiment of Beethoven's (also carried out in the companion sonata, Opus 27, No. 1 and later on in Opus 101) placement of the most important movement of the sonata last.

As a classical song, lots of people pined for Moonlight Sonata stave, if you also like it, learn it!