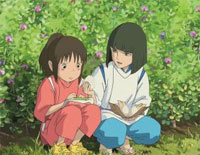 Always with me served as the closing theme to the popular 2001 anime film Spirited Away which is a 2001 Japanese animated fantasy film written and directed by Hayao Miyazaki and produced by Studio Ghibli.

And Always with me was written and performed by Youmi Kimura, a composer and lyre-player from Osaka. The lyrics were written by Kimura's friend Wakako Kaku. The song was intended to be used for Rin the Chimney Painter, a different Miyazaki film which was never released. In the special features of Japanese DVD, Hayao Miyazaki explains how the song in fact inspired him to create Spirited Away. The song itself would be recognized as Gold at the 43rd Japan Record Awards.

Xiao Bian's Chiken Soup of Always With Me:

Hayao Miyazaki is a productive director of anime films. People like to watch them and have various opinions on them. Always With Me, said by some film lovers, is an delivery of White Dragon's companion with Chihiro Ogino. For me, it says the help and company from everyone who makes that.
Another inportant reason that Xiao Bian loves his films is that, there are no bad guys or good guys. They are real just like those around us in the real world.
[ + More Information ]