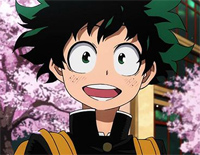 Peace Sign is a song by Japanese musician Kenshi Yonezui, and serves as the opening theme song of anime series My Hero Academi.