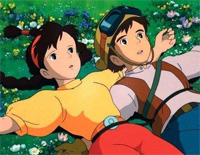 Free Carrying you piano sheet music is provided for you. So if you like it, just download it here. Enjoy It!

Carrying you
is composed by Japanese famous composer Joe Hisaishi. It is the ending theme of the film Castle in the Sky.

While possessing a stylistically distinct sound, Hisaishi's music has been known to explore and incorporate different genres, including minimalist, experimental electronic, European classical, and Japanese classical. Lesser known are the other musical roles he plays; he is also a typesetter, author, arranger, and conductor. The film was distributed by Toei Kabushiki Kaisha. Laputa: Castle in the Sky won the Animage Anime Grand Prix in 1986.