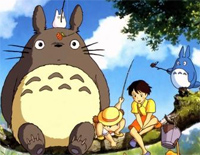 Free TOTORO piano sheet music is provided for you. So if you like it, just download it here. Enjoy It!

TOTORO is a piece of music created by a music lover who got inspiration from Japanese film director Hayao Miyazaki's film of Tonari no Totoro. Hayao Miyazaki is a Japanese film director, producer, screenwriter, animator, author, and manga artist. A co-founder of Studio Ghibli, a film and animation studio, he has attained international acclaim as a masterful storyteller and as a maker of anime feature films, and is widely regarded as one of the greatest animation directors.