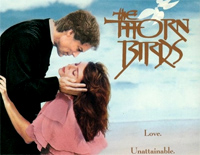 The Thorn Birds Theme numbered musical notation and stave are corresponding completely, which is the specified track for EOP Demon Training Camp and also suitable for his members to practice!

The Thorn Birds Theme is obviously the theme song for a television mini-series The Thorn Birds. It starred Richard Chamberlain, Rachel Ward, Barbara Stanwyck, Christopher Plummer, Richard Kiley, Bryan Brown, Mare Winningham, Philip Anglim and Jean Simmons. It was directed by Daryl Duke and based on a novel by Colleen McCullough.

Set primarily on Drogheda, a fictional sheep station in the Australian outback, The Thorn Birds' story focuses on three generations of the Cleary Family and spans the years 1920 to 1962.

And with the popularity of The Thorn Birds, its theme song also became more and more popular.