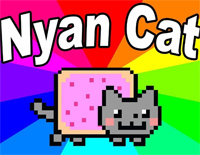 Free Nyan Cat piano sheet music is provided for you. So if you like it, just download it here. Enjoy It!

Nyan Cat is a background music from a game with a same name. It was created by Marc Ellis.

Nyan Cat is the name of a YouTube video uploaded in April 2011, which became an Internet meme. The video merged a Japanese pop song sung by Hatsune Miku with an animated cartoon cat with a Pop-Tart for a body, flying through space, and leaving a rainbow trail behind it. The video ranked at number 5 on the list of most viewed YouTube videos in 2011.