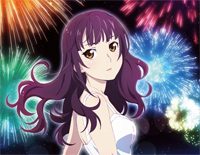 }
Free Uchiage Hanabi-Full Version piano sheet music is provided for you. So if you like it, just download it here. Enjoy It!

Uchiage Hanabi-Full Version serves as the main theme for a Japanese animated drama film, Fireworks, Should We See It from the Side or the Bottom?

Fireworks, Should We See It from the Side or the Bottom? is an upcoming Japanese animated drama film produced by Shaft and will be released by Toho. It is based on the 1993 Japanese live-action drama of the same name by Shunji Iwai. The film is scheduled to be released in Japan on August 18, 2017.