Us-Us and Them Theme Song 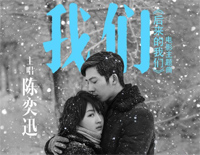 Us-Us and Them Theme Song Introduction

Free Man on The Moon piano sheet music is provided for you. So if you like it, just download it here. Enjoy It!


Us is a song by Eason Chan who is a Hong Kong singer and actor. It is the theme song of an upcoming Chinese drama film Us and Them wichwas directed by Taiwanese singer-actress Rene Liu in her directorial debut.

The film stars Jing Boran,Zhou Dongyu and Tian Zhuangzhuang, and is scheduled for an April 2018 release. The film was shot in Hailar, one of China's coldest places, in winter 2017.