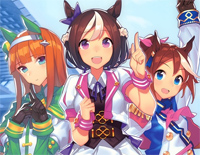 Free Make Debut piano sheet music is provided for you. So if you like it, just download it here. Enjoy It!

Uma Musume Pretty Derby is an upcoming mobile video game for iOS and Android developed by Cygames that will debut in 2018. An anime television series adaptation by P.A.Works premiered on April 2, 2018.