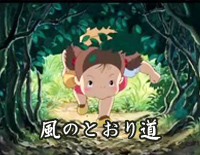 The Path of Wind (風のとおり道 Kaze no Torimichi) is one of Soundtracks of My Neighbor Totoro which is a 1988 Japanese animated fantasy film written and directed by Hayao Miyazaki and produced by Studio Ghibli. The film follows the two young daughters of a professor and their interactions with friendly wood spirits in postwar rural Japan. The film won the Animage Anime Grand Prix prize and the Mainichi Film Award for Best Film in 1988.

And The Path of Wind was composed by Joe Hisaishi who is a composer and musical director known for over 100 film scores and solo albums dating back to 1981.

Download the free The Path of Wind sheet music now!