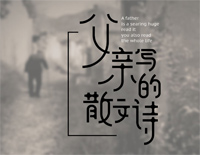 Free A Father's Poem piano sheet music is provided for you. So if you like it, just download it here. Enjoy It!

A Father's Poem
is a song covered by Chinese singer Li Jian. And originally it was sung by Xu Fei. Before beginning his solo career, Li Jian was a member of the duo "Shui Mu Nian Hua". After his departure from the duo in 2002, he began his solo career. To date, he has produced eight albums. He is most well known for his song "Chuan Qi" (Legend) which became a huge hit after Chinese diva Faye Wong performed it on the 2011 Spring Gala.